Where Should We Ship Your Risk Free*
60-SoftGel ThioGel Trial? Just Pay S&H!

ThioGel: A Product Formulation You Can Trust

Even though the Antibioticos alpha lipoic acid costs more than five times the cost of Chinese sources, the proven safety and efficacy of the Antibioticos ALA outweighs any economic benefit from using Chinese-source material. Emphasizing patient safety is particularly important in a situation where large quantities of the active ingredient are consumed over long periods of time. The management and staff of Ethical Alternative Products firmly believes in the effectiveness and quality of ThioGel products. We welcome calls or E-Mails to discuss the features and benefits of our unique product portfolio, and are always willing to answer any questions related to the use of our products.

ThioGel’s Purpose: Getting The Miracle Molecule Where It Wants To Go.

“In a philosophic sense, it is the destiny of the alpha lipoic acid molecule to enter the bloodstream and be distributed to all cells in the body, to perform its anti-oxidant and other biologic functions. The primary impediment to fulfilling this destiny is the poor solubility of crystalline forms of the compound.

Formulation scientists have devised a variety of means to break-down poorly soluble substances to enhance absorption and bioavailability. The scientists who 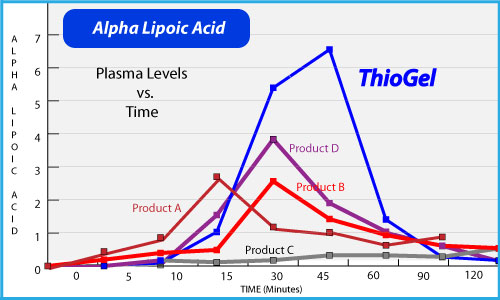 developed the ThioGel solubilized formulation, performed ground-breaking work on the unique amphipathic structure of alpha lipoic acid, achieving a molecular dispersion that facilitated absorption in the intestines. The ThioGel micelle structure was demonstrated to result in a two to three-fold increase in plasma levels of alpha lipoic acid, versus several crystal (powder) based products. Bioavailability studies were conducted on the ThioGel formulation in rabbits and humans using 50 mg and 400 mg doses. Bioavailability, which is defined as the "extent to which the active moiety enters the systemic circulation, thereby gaining access to the site of action", was substantially greater for the ThioGel formulation vs. the powder-based products.

We are so sure you will benefit from ThioGel’s enhanced performance, we will ship you your first month’s supply for free. Simply pay a small shipping and handling fee and start realizing the benefits of the miracle molecule.

It is recommended that you start taking 1 or 2 ThioGel doses every day, once in the morning, and if needed, once again at night. The dose you use will depend on the condition you are seeking to stabilize.

Oxidative stress is not a condition that can always be perceived by the senses, but the restorative properties of alpha lipoic acid, delivered in enhanced ThioGel form, will contribute to your overall sense of well-being. Relief of oxidative stress should also be reflected in future measures of bodily functions that are adversely affected. 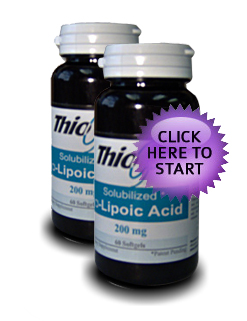 Terms and Conditions | Privacy Policy | Returns | Contact
Copyright © 2014 Ethical Alternative Products. All rights reserved. ThioGel is a trademark of Ethical Alternative Products.
The statements made on our websites have not been evaluated by the FDA (U.S. Food & Drug Administration). Our products are not intended to diagnose, cure or prevent any disease. If a condition persists, please contact your physician. The information provided by this website or this company is not a substitute for a face-to-face consultation with your physician, and should not be construed as individual medical advice. The testimonials on this website are individual cases and do not guarantee that you will get the same results.